Here we will provide information about how to drive a stick shift car. It is essential that drivers learn how to master the clutch when they drive manual transmission cars. The clutch allows drivers to shift gears.

The benefits of drive a stick shift car are the following:

Differences between an automatic and manual transmission car

Third pedal. This is one of the main differences between an automatic and manual transmission car. Drivers should never use their left foot for anything. On the other hand with a manual transmission drivers’ left foot will be used to work the clutch (the left-most pedal).
Stick. This is another major difference between automatic and manual controls. In automatic cars, it would have to be used mainly just for shifting between reverse, park, and drive.

Learn how to drive a stick shift – Practice is the key.
Before trying to drive a stick shift car, once inside the car have a general feel for the controls, gear shifter, and clutch. Generally, manual drivers don’t know how to work the gear shifter. Have a feel for which position equates to which gear. The shifter may look like the following diagrams:

They are both five-speed transmissions, but with different reverse gear position. You will see this diagram on the top of the gear shift.

Before changing gears turn off the ignition and park brake on. After that push the clutch in with your left foot, as it is pushed in, change your gear. You have to disengage your foot from the clutch, once you are in the gear you want to be in. You can practice changing gears starting from 1st and ending in the 5th.

It is a good safety option to engage the clutch to start the car even if your car does not require it. To start the car, make sure it is in neutral moving the stick left and right (the center of the shifting console, where the shifter can be simply moved around). Push the clutch in and turn the ignition and gradually remove your foot from the clutch. 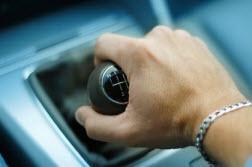 Once you get down to approximately 10 mph or below shift into, you are able to use your brakes in any gear that you are in. If you need to brake quickly when you are in gear, push the brake and clutch in simultaneously, if you don’t, the car will stall out by the time you come to a complete stop.

To downshift without using your brakes, only let off the gas and wait until your speed reduces. Once your speed has decreased, push in the clutch, and downshift to a lower gear. Make this until your speed has dramatically decreased. Downshifting is recommended to do only once you have a good grasp on which speed corresponds to which gear. It is also recommended not to downshift without brakes, because of it does not give the person who is behind you advise/warning that you are slowing down.

It is a good habit placing the car in gear when parking, as it will stop the car from rolling in case the emergency brakes give out. It would be the best to place the car in first or the reverse gear. You have become very vigilant in your use of the parking brake when you drive a manual transmission car.