I have a pretty serious fear of driving my car. It all started when some man in a white pickup truck tried to cut me off when two lanes merged into one, then he followed me into my neighborhood and got out of his car, and threatened to kill me for about 30 minutes. He was twice my size (definitely overweight) and liked Harley Davidson motorcycles. He talked about how he would tie a cinder block to my foot and throw me in a lake and how easy that would be. At this point, I was scared out of my mind. I surely thought I was going to be killed by this man.

Another incident came when someone on a motorcycle cut in front of me by using the shoulder to get to the front of the pack to a red light, so he could be first when it turned green. He ended up looking both ways at the intersection, and ran the red light. I wanted to get the license plate of this guy and report him to the local police for such a major traffic offense, but then the motorcyclist threatened me through my open window and said “you don’t want to mess with someone like me”, and then proceeded to speed up and pass six or seven other cars by using the shoulder again.

Then, one time, I was getting into my car to go leave for a movie. I had parked it at a school to go play football with a buddy of mine on the field….the school, which was nearby the onramp to go to the next town, had a good movie theater. As I was leaving to go catch the movie with my friend, a man dressed as a police officer approached my car when I was pulling out of the parking lot. He jumped right in front of my car and I swerved to get out of the way. I didn’t know if he was a policeman or not because he didn’t show me any badge, nor did I see a police cruiser nearby, and his actions of attempting to stop the car with his own body seemed like it could have been just a weirdo on drugs, so I freaked out.

As I swerved around him to get out of his way, he threw his maglight into my back passenger window, which shattered and cut my face, the maglight sitting in my back seat. I didn’t know what to do, so I went home. I ended up realizing he was a legitimate police officer when my friend, who was stopped at gunpoint by the same officer, allowed the policeman to use his cell phone to call me, and he left a message saying he wanted his maglight back. I invited the police over to my house and they thought I was attempting to run over the police officer, but I honestly didn’t want to do that, that’s why I swerved out of the way. When they were interrogating me, asking why I didn’t stop, I told them honestly that I didn’t think the man was a real cop, since I saw no badge or police vehicle (until they came over to my house).

All three of these events have culminated to me not wanting to drive, any more. I haven’t driven my car, or any other car, in almost a year, for fear of driving it. Also, I have a couple speeding tickets, which will stay on my record permanently if I get another one before I turn 23. I am 21 right now.

I am currently taking 4mg of clonazepam and 200mg of seroquel at night, because I have lingering fears about that man in my first story, coming to my house to kill me, so I can never sleep at night, and I had some really bad panic attacks, ending in either losing my lunch, having full body shakes for fifteen minutes at a time while also feeling as if I am going to have a heart attack and I have trouble breathing. Sometimes the panic attacks are so bad that I literally cannot move. It’s like I’m playing dead, except shaking all over. Since taking the medication I have been prescribed, I haven’t had many panic attacks–I usually only have them if I am in an unfamiliar setting with people I don’t trust well. I also have test anxiety, which means I cannot fall asleep the night before a test.

So…having this fear of driving has caused me to come up with a whole round of excuses as to why I “can’t” drive, that I tell friends, who want to hang out and seem a bit perturbed that I don’t have my own form of transportation. Most of my days I live out at home, since I’m terrified to go out by myself in my car, unless I am picked up by a trusting friend or driven by my parents or older sister. It makes me feel as if I have no independence whatsoever. It also doesn’t help that my car looks like hell since I dented the front end badly and never replaced it (don’t have enough money/don’t want to do it/would rather buy a different car), when my foot slipped off the brake pedal at a red light and hit the gas while I was in 1st, causing me to slam the back of the car in front of me.

I think the only way I am going to start driving again is if I get a new car–the old one is haunted with bad memories.

I am terrified of being in cars. I have had a car crash caused by another driver which caused me to rollover three times and I remember vividly rolling over at times. The other driver didn’t even check to see if I was alive. I did wear a seatbelt and only hot a minor cut to my arm. After that I tried riding a bicycle and another car crashed into me, failing to see me because of the sun . In that accident I got catapulted onto the windshield hurting my back. No I take the bus which makes me feel safer. If I get in a car anything over 45 km/ hr makes me anxious and uncomfortable. I also tend to argue with drivers and give them driving instructions when I feel they are inattentive. It’s such a hardship!!!!! But I can’t even think about trying after so many failures. It’s not my driving that scares me- it’s other people’s driving that terrifies me, drunk drivers, people that text and drive or have conversations in the car.

Hi, for the last 10 years I was in a very insecure relationship with a man who had to control everything. Well, he never let me drive. He always took me wherever I needed to go. But I had no freedom of my own. Anyway, he passed away suddenly and now I HAVE to drive. He made me so afraid that now I can barely sit in the driver seat without feeling a panic attack. I have tried over and over. I know that once I get over the initial fear, I will be ok. But I just cannot seem to be able to even back the car out.

It can be terrifying to have a run in with another driver or to be shut off from any experience, including the experience of driving, because of someone else’s actions.

Though this is scary, it is not as uncommon as you may think. The issue here is a fear of things (in this case the actions of others) that can’t be controlled. These kinds of run-ins can happen between people in any situation, not just when one or both of them is driving a car.

Ask yourself if you have problems standing up to the inappropriate actions of others in general. In two of your situations, the parties involved were acting in malicious and threatening ways, and that is really the issue.

Brian, it sounds like you have consulted a medical professional to deal with the effects of the traumas you have been through. Have you considered counseling as well? You might find that an experienced counselor can help you get to the core of your fears so that you can deal more effectively with the inappropriate behavior of others. 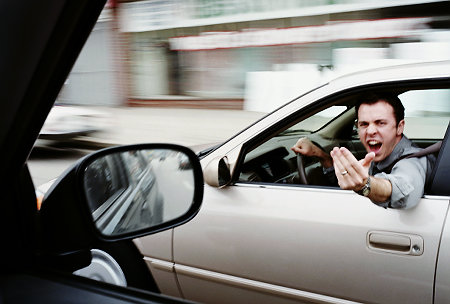 This is also true for Barb. If you were in an abusive relationship for 10 years with someone who controlled you, and one of the ways he controlled you was by prohibiting you from driving, that may be more of an issue than your current fear of driving, as it’s likely that that is not the only thing he controlled.

Of course you’re afraid to drive now; you haven’t had enough experience behind the wheel. In time, if you face your fear, you can take steps to overcome it so that you will be able to drive. Again, counseling, in particular behavior therapy, may be helpful.

In Monica’s situation, the accidents don’t sound like they were caused by someone else’s malicious intent. However, being in a car accident of any kind can cause real fear and anxiety, and it and needs to be dealt with. Check out our article on fear of driving due to past accidents for more ideas on how to handle this.